What do new intelligent dozers, two excavators of vastly different sizes, a specialty pipelayer and two mid-to-large-size wheel loaders have in common? For one, they were named among the Top 100 products by Construction Equipment magazine. More importantly, they were built with new efficiency and production features driven by customer input.

Among the prominent machines on the list are intelligent Machine Control 2.0 D51i-24 and D61i-24 dozers with integrated GPS technology that is proven to boost production by as much as 60%. They feature proactive dozing control that lets operators cut and strip like an experienced operator from first pass to last. (See related article on page _ for additional features).

Earthmoving companies of all sizes appreciate a basic digging machine that’s easily transported from job to job. They like it even better when the machine offers fast cycle times, deep digging capabilities and high production, such as the new PC130-11, according to Andrew Earing, Komatsu Senior Product Manager.

“Mobility is a real asset with the PC130-11,” said Earing of the 28,660-pound excavator that digs more than 17 feet deep. “When a contractor finishes one job, they can quickly load this excavator and be on the way to the next site. When they get there, it’s a matter of minutes to unload and start digging. That increases production time.”

He added that the PC130-11 is built with steel castings in the boom foot, boom nose and arm tip for exceptional durability. It is available with plus-one piping as an option, so you can run attachments for a wide range of applications and potentially boost profits.

The much larger 200-ton class PC2000-11 mining excavator is built for high-volume digging and can move up to 17.9 cubic yards of material in a single scoop.

“Customers told us they want better multifunction performance and productivity than the previous model and the competition,” said Joe Sollitt, Komatsu Senior Product Manager, Mining Support Equipment. “With more available engine horsepower, we were able to increase pump absorption and re-engineer the engine-pump-control logic. In combination with a more efficient hydraulic system, the PC2000-11 can load out more material per shift.”

Sollitt emphasized that Komatsu designed the 1,046-horsepower excavator for greater reliability and durability with thicker, stronger boom plates and castings that are highly resistant to bending and torsional stress. The center and track frame were strengthened, and it has larger diameter carrier rollers for extended service life. He added that a ground-level service center is standard, and the power module that service personnel grew to love was maintained. 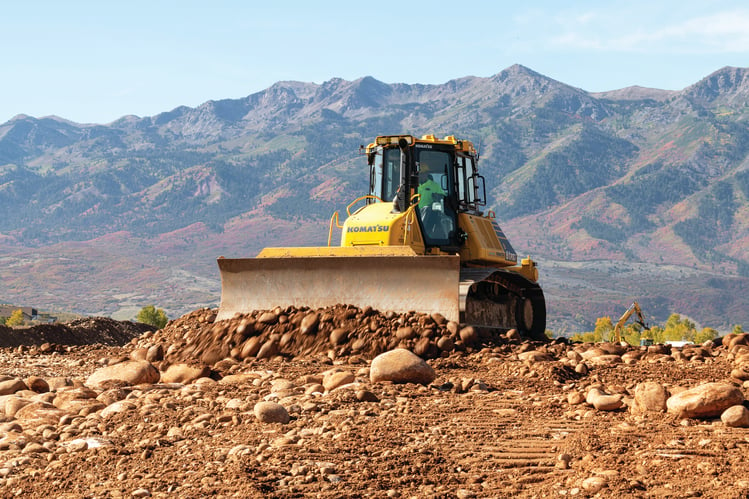 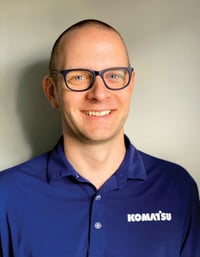 New iMC 2.0 dozers increase production up to 60% with the ability to use automatics from grass-to-grade

One of the key attributes of Komatsu’s new intelligent Machine Control (iMC) 2.0 dozers is patent-pending proactive dozing control that automatically cuts and strips from existing terrain like an experienced operator – 100% of the time, from grass to grade. This technology increased production by as much as 60% compared to the first-generation dozers, according to Komatsu Product Marketing Manager Jon Jennings.

“The ability to use automatics from first pass to last, instead of just during the finish grading, significantly reduces the time it takes to reach target elevation,” said Jennings. “Proactive dozing control logic decides the appropriate action, such as whether to cut and carry material, spread or fill that material or whether it should finish grade.”

The system provides the real-time position of the dozers to the job site to create a highly accurate elevation for it to drive the blade to the precise grade needed. During operation, the dozers measure the terrain as they track and use the track-level data to plan the next pass.

Improved automation is also part of iMC 2.0, including patent-pending lift layer control, which automatically spreads fill from existing terrain with the press of a button. Much like proactive dozing control, this feature tracks the terrain and uses the data to plan the next pass, which doubles production and achieves consistent layers for quality compaction.

Additional automation features include tilt steering control that automatically tilts the blade to maintain straight travel during rough dozing, reducing the need for operator steering input by 80%. Quick surface creation produces a temporary design surface with one press of a button without the need for a complex 3D model.

Other upgrades include a second GPS antenna, which Jennings noted will aid in side-slope work. The new machines also gain access to three additional satellite systems.

“The biggest advantage is greater overall accuracy,” he said. “More satellite systems increase production through the ability to use GPS in places where it may have been a big challenge before, such as at the edge of a wooded area or close to buildings on an urban project.”

In addition to the new D51i-24 and D61i-24 models recently touted by Construction Equipment magazine as top products, the D39i-24 and the highly anticipated D71i-24 that was introduced last year at CONEXPO will soon be available.

“We had numerous orders for these machines before they were available because customers realized how much the new dozers will increase their production,” said Jennings. “We encourage anyone looking for the same in their business to contact their distributor for a demo, more information or to add one to their fleet.”

Komatsu incorporated next-generation technology with considerable benefits to make its new WA475-10 wheel loader an ideal fit for quarry, waste, infrastructure, forestry and non-residential applications. Feedback received in the field guided improvements, which made it 30% more fuel efficient than its predecessor, leading to savings that can potentially make you more competitive and profitable.

The WA475-10 has 18% greater horsepower but achieves increased fuel efficiency with its Komatsu hydraulic mechanical transmission. Contributing to better economy and productivity is the independent work equipment control that simplifies operation by separating the accelerator pedal from the speed of the work equipment. 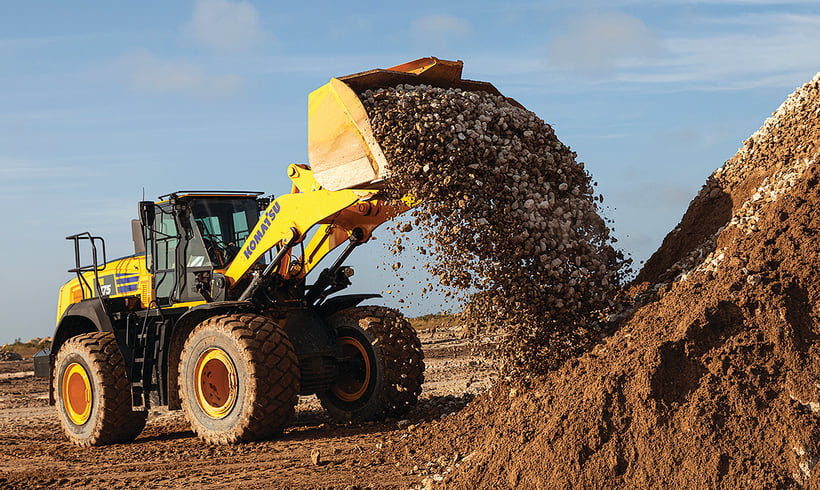 To further boost productivity, the boom lift force was bolstered by 20% and breakout force increased by 8%. A new bucket design improves pile penetration and better retains material in load-and-carry applications.

The WA800-8 wheel loader also has a new bucket shape that incorporates an increased radius and floor inclination to make it easier to fill and retain material. The spill guard was adjusted to give operators improved visibility to the pile, and sweeper wings on either side protect the front tires. In larger quarry, aggregate and mining applications, the 254,700-pound machine is an ideal match for 60- to 100-ton trucks.

The loader features key new automatic and semi-automatic systems that assist operators and contribute to productivity and efficiency. The three features can be used together or separately to automate the work phases when V-cycle loading, including automatic dig to optimize bucket load, actuating the bucket and lifting operations by sensing the pressure applied to the work equipment.

A semi-automatic approach raises the boom automatically when reversing out of the pile. The lift arms elevate until reaching the upper setting of the boom positioner, allowing the operator to focus on the travel path of the loader.

Komatsu worked closely with pipeline companies to develop its new D155CX-8 pipelayer that has an oval design nine-roller track with 12 feet, 10 inches of track on ground for stability. It also features 32-inch track shoes.

Heavy final drive components are close to the ground, which lowers the center of gravity. The rollers are fixed suspension and don’t oscillate like a dozer for greater ground contact.

“It’s essential that we get feedback from the contractors who will ultimately use a pipelayer like our new D155CX-8,” said Chuck Murawski, Product Manager, Dozers. “One item they recommended was a larger steering motor, so we incorporated one into the machine to give it better displacement and more torque.” 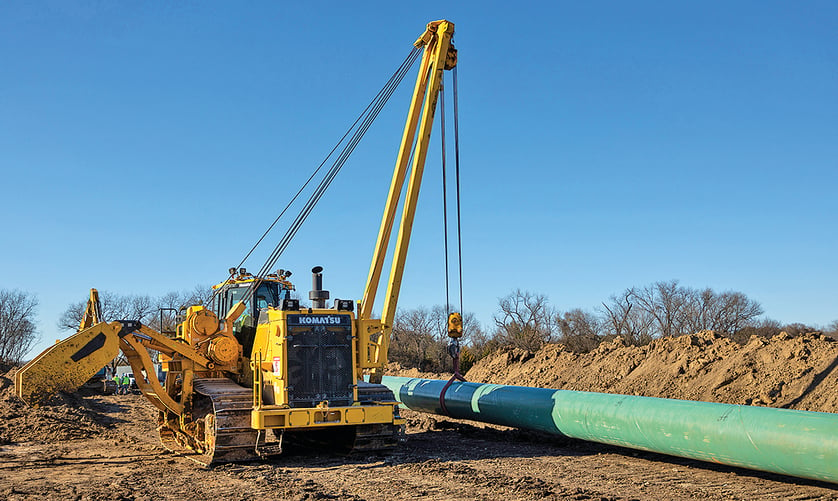 The new D155CX-8 pipelayer has an oval design nine-roller track that features 12 feet, 10 inches of track on ground for stability. With a 170,000-pound lift capacity, the D155CX-8 can handle up to 36-inch steel pipe. It offers a K170 pipelayer package with a standard 24-foot boom length.

Get resources & insights directly in your inbox!